Managing Stress with Nervana: Worked for Me!

What does Nervana do for you? It seems like there’s a wide variety of answers to that question.

From what I’ve been reading, it sounds like my experiences are similar to a lot of new Nervana users. One difference, though: I was able to document the changes I thought I was feeling.

A few weeks before I received my Nervana, I got a wearable called Spire. About the size of the knob on the Nervana generator, Spire clips in along the belt line of your pants. It monitors your breathing, and senses whether you’re stressed, calm, focused or (d) none of the above. It’s supposed to help you be more mindful of your stress.

The weeks leading up to Nervana, Spire was telling me that about 80 percent of the time it characterized was tense, and that I was calm for most or all of the rest.

Nothing changed during the first few days after I got my Nervana, which isn’t surprising. Like many, it took me a couple of days to dial it in, choose the right size earbuds and spray the right amount of saline for a good connection. I found that I tolerated the stimulation well, and switched to formula mode after only a couple of days.

What I did notice was that, over time, I had a better handle on my stress. It’s not magic. I still get stressed. But it’s for much shorter periods. And it’s markedly easier to control.

Spire seems to agree. About five days after I got Nervana, it started to report noticeably more calm – at the expense of tension. And about a week later, Spire reported that my calm kicked into another gear. That trend continued for another week. 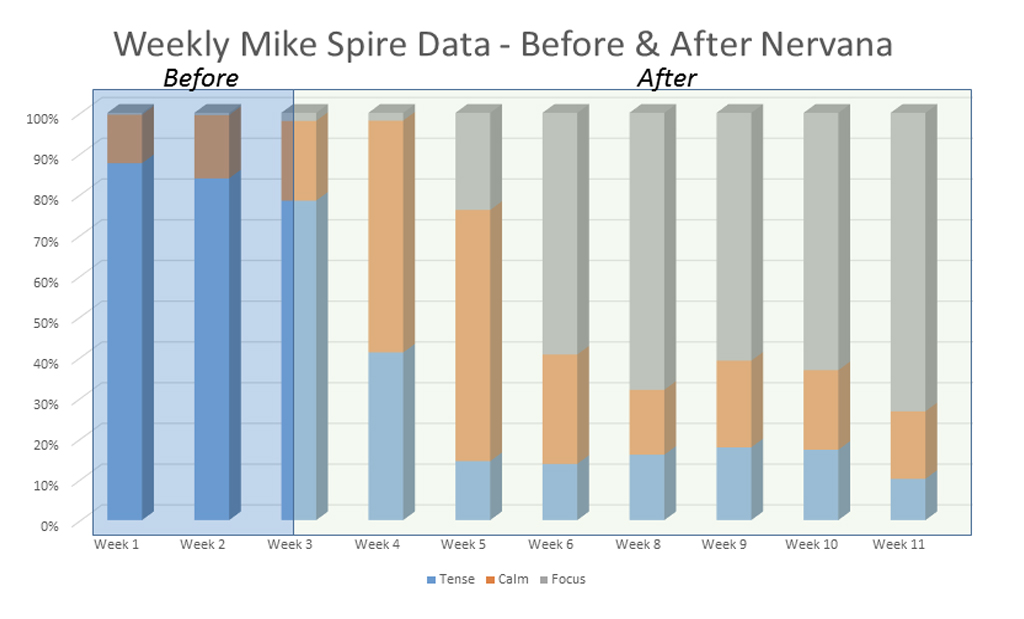 And then, all of a sudden Spire began reporting a marked jump in focus, a trend that gained steam for a few weeks. At first, focus was coming at the expense of tension, while calm more or less held steady. But eventually, focus began eating away at the percent of calm as well.

Now, that’s not necessarily a bad thing. I’ve been working really hard these past few months, and it’s much better to be tackling tasks with focus than with tension. I am getting a lot done, and having a much more pleasant time of it.